What is Dru Yoga! Dawn Marsh 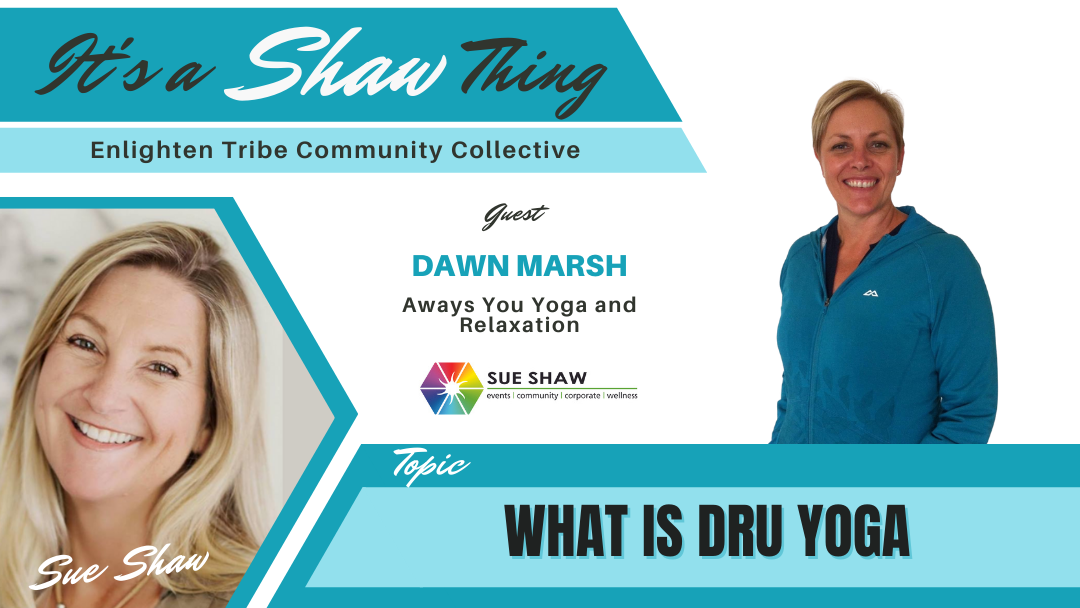 One of the things that I love the most about being a yoga teacher is that it’s just opened me up to be able to express all of these different versions of myself, and that’s something that I think really keeps me engaged and passionate for learning and doing more and it’s lots of fun.

What’s the difference between Dru Yoga and other yoga styles?

One of the differences is that it’s very inclusive of all ages and all abilities and is trauma-sensitive as well. There are so many beautiful forms of yoga out there, and Dru Yoga is very gentle, very accessible, and very grounding.

It works on all of the layers of who we are so we’re not just working on the physical, or the emotional layers, but we’re also tapping into thought, movement, and freedom in the body. It’s about moving energy through the body. It’s also about creating community and because of the environment, everyone becomes friends, they support each other, they help each other, they encourage each other and that is a very Dru thing.

One of the things I love most about Dru is that it’s really community minded and community based practice and it comes from the heart, which is something that really drew me to it and something that keeps me there too.

The practices are based on all the traditional yoga movements but there’s this inter-woven influence. The original people who created Dru come from an osteopathic and physiotherapy background so the format for a yoga class weaves through a series of things.

The first thing we do is an activation, and we’ll always warm up the body and get the body moving, then we’ll get the body settled and grounded by perhaps shaking or other things to get the body present and get yourself present in the practice too.

Then we go straight into a posture, and Dru has many energy block release sequences that follow the activation and they can the foundation sequence which is all about the spine or we may do the opening heart sequence, or being present in the moment.

Then we’ll do some stretches specific to how we’re going to do some traditional yoga poses and every now and again, I do get everyone into a downward dog but the beauty of Dru is that every single posture, every single movement can be modified for the person and I think that’s what makes it really inclusive.

Then at the end, we’ll come into a relaxation which everybody loves because they’re so beautifully designed to relax the nervous system and to bring the person back into a state of calm. Dru is based on coming to points of stillness and they’re the things that really resonate with me, and I love to be able to teach them.

So many people come up to me after a session and say I don’t know what you did, but you’ve got me again!

I think it’s the fact that the sequences, the way that we describe things, the way that we move people into the sequences and the language we use is really open and that comes from that awareness and the way of communicating that naturally gives everyone a sense of “I can do this, I’m open to this”. “I’m feeling free to do this”.

The greatest pleasure for me is guiding them through what I’ve been taught and watching and knowing people are doing things with their body that they haven’t tried or haven’t wanted to try or haven’t been given an open, supportive space to try for a really long time.

Where does the name Dru originate from?

Dru is the name for the North Star, in the Northern hemisphere, and it’s about the still point in the Universe. So Dru is about the fact that life can be very chaotic but Dru itself brings you into that point of stillness so whenever I think about that and whenever I think my life is getting busy and chaotic, or I get emotional, I resonate with that thought that Dru is the still point in the Universe when time slows down and you just melt.

What Classes do you offer

The classes I teach at the Aquatic Centre, you can attend as a casual member or can join as a member. I’ve been teaching outdoor yoga classes myself for many, many years. I used to teach a Saturday morning class for years down the beach with a stunning view and I’m teaching outside on a Tuesday morning on the grassy area at the Aquatic Centre and have called it Get Grounded because that’s what we’re doing, being connected to the earth.

Another beautiful thing about Dru is that we’ve got so many beautiful sequences that are perfectly practiced outside and you can take this beautiful yoga practice, literally anywhere. For those of us in South Australia, I’ve taught a class halfway up Mount Lofty, down at the beach, and in various outdoor locations and used to do pop up yoga when I first started.

I did Club Yoga for over three seasons for the Holdfast Bay Council and I created it with a couple of other people to incorporate yoga with music. I often did Club Yoga with a DJ which is heaps of fun as I love to dance to bring that open hearted fun and joy to people. Again, getting people moving because when you’re moving your body to music, often you forget that you’ve even got any discomfort and all of a sudden you’re just really flowing with it and having so much fun that you walk away feeling so good. It’s about bringing that joy to the community and watching the little kids dancing with their grandma and their mum, and everyone having a really beautiful time connecting. One time we had up to 200 people and just to see everyone move at the same time is such a joy.

Can anyone do Dru?

I have taught classes in aged care homes, and my oldest participant was 101 and she loved it because she said that it made her feel so at peace. Obviously we were seated and doing very gentle movements but she never missed a class.

It’s also being delivered in schools which is a beautiful thing.

Putting the feet on the earth, being out in the open air surrounded by an abundance of pranic energy, which is just so good for the body. The free class is at 1.30pm-2pm on Saturday 4 December 2021 at Partridge House, Glenelg.

We ran the first one on Sunday and they’re another beautiful offering for busy people. We wanted to provide some opportunities for people to learn some things that they could do at home to stay energized and grounded but that you could do at work if you wanted or out in the park so you could mix it up. I teamed up with an absolutely amazing lady, Andrea Ball, her business is The Green Gourmet here in Adelaide. Andrea took us through some absolutely scrumptious cooking demonstrations and we got to make our own.

It’s about healthy, portable meals that are easy to make and highly nutritious. Once they’re made, you can literally just grab them from the fridge as they last for four to five days. The concept of being able to nurture yourself with food and with the beautiful yoga and meditation practices, wherever you are, whether that’s home, office, at the beach, the recipe is just so easy, and so nutritious that you can literally have it all packed and take it with you.

If you’ve got all of that prepared, and you know that you’re going to nourish yourself, then maybe you might have more time to practice some of the other things you’ve learned.

I’ve teamed up with Sadie from Serenity & Sunflowers – Just Be, who got me involved with the Holdfast Bay Council so our relationship has been going for quite some time, and Sadie is a Health & Wellness Coach and has written a book. We’re going to run some Wellness Your Way sessions – one in February and one in March at the Kauri Community Centre and it’ll be a conversation and a beautiful opportunity to learn some things and combine that with the beautiful flowing through yoga, so I can’t wait for those.