Your Face and Your Body are Your Roadmap ~ Linda Thackray 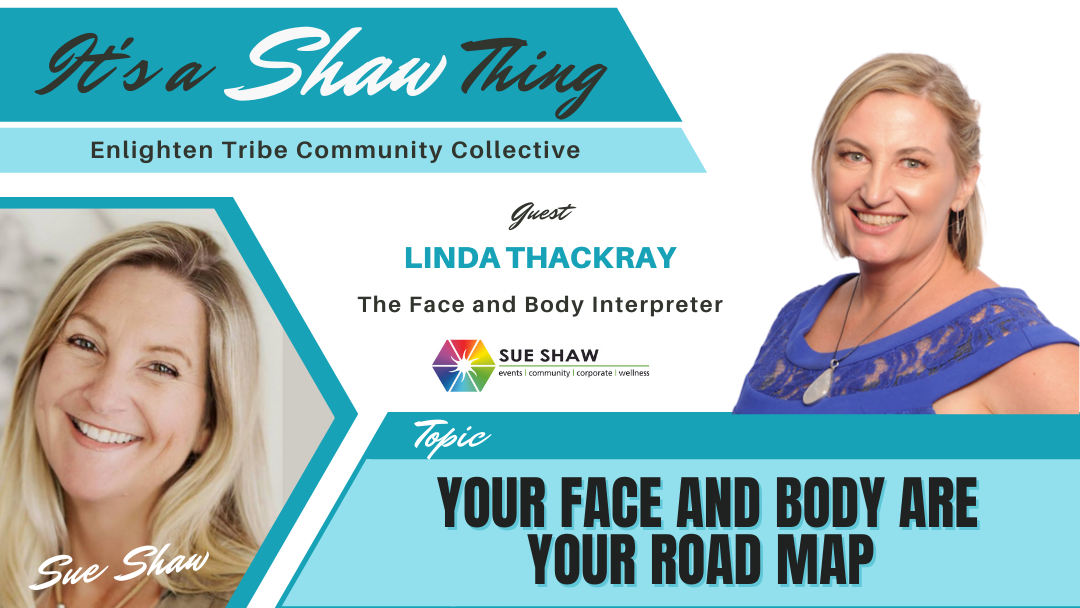 I’ve always had an interest in helping people and was doing telephone counselling for about six years before I came across face reading via Psychosomatic Therapy, and it just spoke immediately to me. I signed up on the spot for the training and since then I’ve moved completely into full time Psychosomatics.

It’s about reading people and the emotions that get stuck and some of the unconscious patterns in the face and in the body.

How do you read a face?

There are different overlays of how you read someone’s face and the first overlay is the chakras or energy centres which start at the chin and go up to the head. Every part of the face corresponds to a part of the spine, the face, the body is already mapped over the face as well. So the different energetic centres and emotions get stored in each part of the face.

Outside of that, we take a look at the geometric shapes. So in the same way that you would maybe use a square or rectangular brick for building, you’d see that in the face, and it would tell you about someone’s practical nature as opposed, for example, a circle which we associate with things like balls, playing sports, and moving, and the geometry in the face is very much the same as what we would consider in the outside world.

Every feature on the face has a different meaning, so it’s a bit like putting together a jigsaw puzzle and seeing the unique blueprint that everybody comes into the world with. So the face shapes give us a basic foundation and then the individual features speak of the personality, much the same way as a fingerprint does.

Quite often emotional patterns show up in the body when we have had difficulty expressing emotions and we may have suppressed them. It can be anything from anger, sadness, even excessive joy will also show up in the face and what we’re actually reading is habitual emotional expressions. When you see a pattern that’s been created, we can also see some childhood influences such as the skin tone and the shape of the body in different parts tell us how someone is enjoying their experience.

We look at what muscle groups would be involved and some of the common ones include pursing of the lips together. When you start to see that as a habitual pattern, the lips actually disappear.

In some jobs, people have to keep ‘tight lipped’ which basically means they don’t share too much and hold secrets well.

There’s always a positive way to read a feature and when I work with clients and students, I teach them how to bring a person back to balance if they’re out of balance.

The right hand side is the public face so it’s very much action oriented whereas the left hand side is more the feeling and intuitive side, so it basically crosses over left brain, right brain.

When I first started the work, I had no idea of the dramatic changes that would occur within the face when a person does that inside work. Once they let go of not being good enough, or presenting a mask, so that they’re appearing different to the outside world to what’s actually happening in their inside world. As those two worlds meet, there’s a corresponding shift in not only the face, but in the body as well which is quite remarkable.

How long has Psychosomatics been around for?

Psychosomatics was created by Herman Mueller, who was such an amazing man who could actually see what was required out in the world.

He started this work around 30 years ago and sadly passed away in 2017 but his work continues through INTAPT (the International Association of Psychosomatic Therapy), it was his life’s work. He realised the benefits of how people can learn when he was working with children that had been institutionalized. He was part of a team that were responsible for reintroducing these kids into assisted care living and he said it was miraculous to see the change. That was when he started saying, what about people that have had trauma in their life, either in their childhood or growing up? Or in their adult life?

What if we could create a safe space for them to explore and normalize some of the emotions that they’re feeling? At the same time, he’s added something which is really interesting and that’s the left brain, right brain integration. So you have to be a student where you’re learning to read another person but at the same time, you’re also being read, so there’s this constant swapping from left brain, right brain interaction and I was always taught to follow and trust the process. The changes that people experience, they’re not really even sure how they’ve changed, but they recognize that they’re really different on the inside.

The Frame of Mind

Quite often we hear people ask ‘what frame of mind would they have been in to have done whatever’. The frame of the mind is the scalp, so when we see a straight line, for example, that person may be more structured in their thinking style and like logical step by step processes. When you see someone who has an oval face shape then they’re a little bit more open and flexible to new ideas. So if you put those two people in a room together, one may like to have that sequence of how they do things step by step, and the other will go oh, let’s come back to that later and later may not work for the more logical step by step person.

When you explain to a person their gifts, and how they process, sometimes they’re already aware that they’re challenged by some of their colleagues in the workplace but they’re not sure why but when you tell them how they process differently to others, all of a sudden, those aha moments kick in. One of those is the gap between the eyes and the eyebrow so someone with a wider gap may generally require more time to process and things need to feel right before they make a decision. It has nothing to do with IQ or intelligence, they just need time to think about it first.

During a Body Reading session we literally look at everything from the hand to the feet. We look at the shape, length of the digits, on both toes and fingers and we look at the end as well as every digit has a different meaning.

We look at what part of the foot lifts off the ground and what touches, for example, the arch in the feet, or the flat foot, or the lead foot, they’ve all got emotional components to them. The high arches can indicate a flight response and the lead foot is more the fight response. It all starts to build a picture so that you can then add the tools to help bring someone back to balance by  working on changing their posture, their breathing, and understanding how their shape has been created.

What are your top three things about face and body readings?

I teach face reading as an introduction to Psychosomatic therapy. During that it is also part of the Psychosomatics as well in that it is therapy based, whilst you’re learning some skills.

I run it over three days and also as one module a week. My next classes are in February 2022.

To become a Psychosomatic Therapist usually takes six to 12 months online, and then you can get certification as a face, hand or foot reader.

Directory: The Face and Body Interpreter