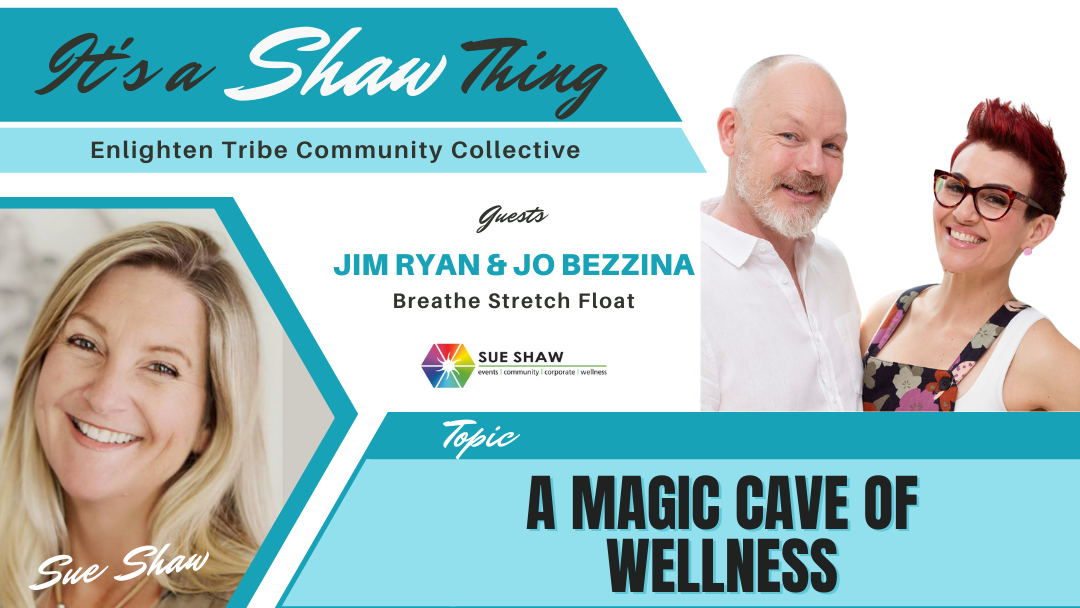 We wanted to create a place that provides a connection and that actually does what it says it’s going to do so that you leave feeling better than when you arrived. The minute you walk in the door, you feel the tension and stress drop away from you.

We’re passionate about making connections with people so that they feel seen, heard and understood.

Jo: I started on my journey later in life, after being bullied for a number of years from being overweight and struggling with body image issues. The emotional pain that came from that inspired me to put all that knowledge and experience about health and wellness into a long term and lasting goal and one day I just woke up and decided to do bikini fitness competitions

I did that for a year and a half and had a very different lifestyle which was a great challenge for me. I loved it and met some awesome people, then that furthered my journey onto other things and somewhere along that journey, I met Jim, and together we’ve made Breathe Stretch Float what it is today and absolutely love it!

We’re located at 153 Flinders Street in the CBD and are open 9.30am-5pm Monday, Tuesday and Friday, and now open until 9pm on Wednesday and Thursday, as well as Saturday 9am-5pm.

We’re up to about four tons of salt in the room at the moment. The salt gives us a vibe and gives an aesthetic that many people love. We get a lot of healers, psychics and mediums who work on a frequency that I don’t, but they report that they feel energy from the salt.

We get lots of people coming in and charging up and  cleansing their crystals but from the scientific background, we have people with asthma, allergies, hay fever, chronic obstructive pulmonary disease, coughs, colds, sinus, ear conditions, all of those, as well as skin conditions.

The room is magical.

We have a client, who in 2019, was hospitalized five times a year for up to five weeks at a time. She has chronic lung disease and was told she had three years to live. She uses the salt room three times a week and hasn’t had one hospitalization since she started using it. She hasn’t had a cough or cold and doesn’t get hay fever symptoms anymore.

We quite often have people coming out and saying, Oh, I think I fell asleep in there. We’re all so highly strung and highly stressed and it’s just a beautiful space where people can rest and stop for a while.

We had a lady who was seeing the nose and throat specialist for three months, and things were so bad that she was scheduled for grommet surgery. She did four sessions, went back to the specialist, and got the all clear saying she didn’t need surgery anymore.

It’s great for kids as well as they feel like it’s their own little private sandpit – but it’s salt!

There’s a machine called a halogenerator that uses pharmaceutical grade salt which is the purest form of salt that you can get. There’s no caking agents in it.

Salt is antibacterial, so it has a cleansing effect on the respiratory system and the skin, anti-microbial, anti-inflammatory, and a natural decongestant so it does so many different things that benefit us and boosts immunity and just helps you to live life better.

We’ve got two float tanks that have 350kg of Epsom salts in them. So if you picture your Epsom salt bath, but on a huge grand scale, to replicate the density effectively so you are completely weightless in that you don’t have to hold yourself up. A great deal of our own energy is expended during the day just from holding ourselves up. So this is one hour where you get to just do absolutely nothing.

You can choose to have music on or off and we can stream music from Spotify or you can bring your own guided meditation or even study notes as your system allows the levelling process to go deeper quicker for accelerated learning.

The magnesium in the salt is really great to help with muscle recovery, especially for athletes and people who are heavily into their sports, it’s a perfect way to really lift their game and improve their performance because if your muscles are recovering a lot faster, then you’re able to lift heavier weights, and your body regenerates enough to do what it needs to do in order to perform at your optimum level.

The water in the tank is the average skin temperature and is designed so that when you find stillness, you don’t know where you end and where the water begins. We’ve had people experience some pretty significant spiritual journeys in the float tank.

The still time really helps to reduce anxiety, increase serenity levels, lower blood pressure by 1- to 15 points, is hugely beneficial because cortisol levels lower pain reducing endorphins and feel good endorphins all increase. This is all the science about the benefits of it. We know this because people have been in who have had blood tests and we’ve been able to look in detail at how the body reacts and changes.

This is a fun ladies-only monthly class which is a burlesque cabaret style and is designed for ladies to just come and let their hair down at the end of a work week. No dance experience is needed, it’s just all about having fun in a safe environment with no judgement whatsoever. It doesn’t matter if you’ve got two left feet, or 12 feet!

It’s so lovely to see the joy on their faces and the fact that they’ve tried something different and it also doesn’t matter how old you are – it’s for all ages.

It’s more of a social event too because after the class everybody goes across to the pub so there’s more depth to it than other dance classes. Oh and bring your feather boa!

Last year we really wanted to give back to the community and we found a charity that was basically doing it tough and received no funding from anywhere. We found Glyn Scott, an amazing woman, through her journey of domestic violence and through losing her own two sons from domestic violence has done amazing things.

She’s like an Energizer Bunny, she is in her 70’s and runs the foundation by herself with a small group of volunteers. Through meeting her and hearing about her journey, we decided to choose her as our selected charity to give back to the community and held our first fundraiser last September called Mosaics and Merlot as she runs mosaic classes as well. All the money raised goes directly to the charity.

Glyn was instrumental in having national and international laws changed, that’s how much of a big figure and impact she’s made. Her main difference is that she helps women, children and their pets, and quite often in a domestic violence situation the pets are left behind.

I’ve had my little pod of people that I’ve helped through that with some really amazing results. You don’t have to be someone who smashes it out at the gym, it’s through natural, wholesome foods.

The great thing is that you’ve got your own personalized mentor who can guide you through the journey and the added benefit that I can wholeheartedly say that I have experienced these emotions. The struggle is real.

It’s wonderful when you hear that change of language because the hardest part is always starting. Having a support network, which we have is so important. Once you’ve got that and you’ve started, it’s very simple to follow.

Through healing the gut, which is the brain centre and emotion centre of the body, so if your gut is out of whack, everything will be out of whack, so when we fix that, then we’re well on our way to all round wellness.

Havening Technique helped me a lot when I was at my darkest point.

It’s a psycho sensory technique that works on the amygdala and that is basically about recreating biological and neurological pathways. So when we have trauma encoded in the body and brain, for things to happen we must have an event, the meaning we give that event then the mental landscape that we’re bringing into it. And lastly, if we feel that’s inescapable, that can be that one off, traumatic incident or robbery or mugging, or it can be that slow erosion of self from being in a relationship that’s toxic for years and years.

Once that trauma gets encoded in the amygdala, we have a thing called an AMPA receptor that glues so havening through delta waves, that allows for the AMPA receptor to become unglued, then that troubling memory of those anxieties become just a thought that carries no chemical or physical charge on the body.

It’s just like picking up a glass of water that carries no meaning. We’ve had people with some pretty severe things that have happened to them in life and after a few sessions, it just doesn’t bother them anymore. We take subjective units of distress, so one being the lowest and 10 being the highest, and ask how much does this affect you?

As we go through the process, we actually check in with the client to see where they’re at on the scale of one 10. Sometimes we can go from a 10 to a zero, sometimes we can get down to three, and the client may say “You know what, with what happened in my life, I’ve been living at a 10 but a three actually keeps me safe. Three makes me retain a little bit of that knowledge, a little bit about power, we got from that incident.”

There’s a brilliant book about it from Ron Ruden, it’s a deep read if you’re interested in the science base of it.