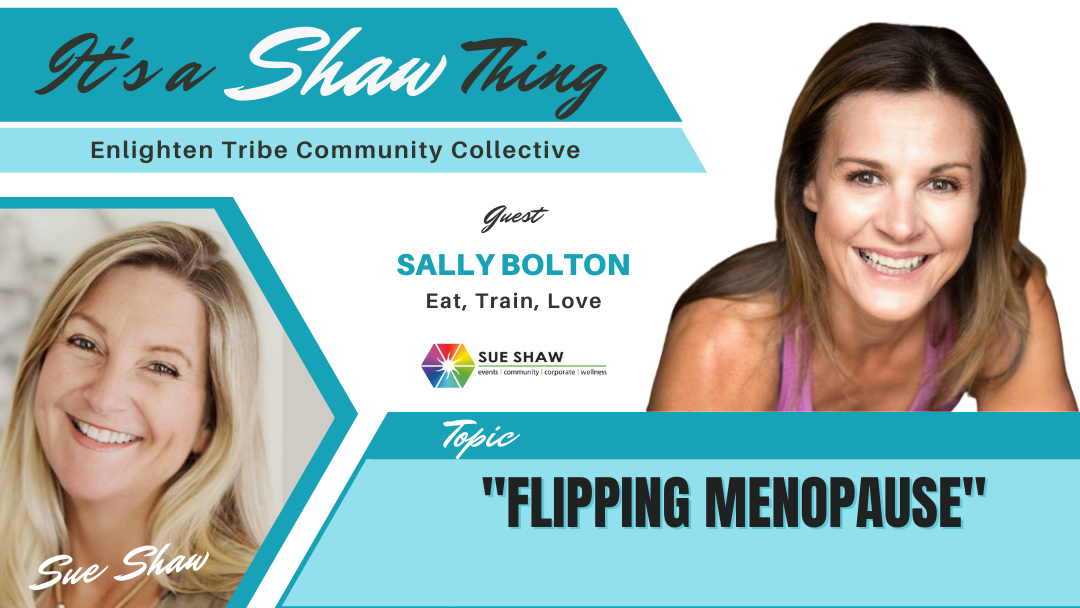 Over a year and a half ago I suddenly had the realisation that I was having symptoms.

I was aware of menopause, but I didn’t really know too much about it, so I decided to look into it a little bit more.  Fast forward to the last five or six months, I realised it wasn’t just me that it was impacting, it was a lot of other women too – friends of mine, colleagues, and clients.

People were talking about menopause and not really understanding what was going on and because I was going through it myself I did more research and spoke to others about it and discovered there is a lot of  misunderstanding around it and it’s still a very taboo subject, even though it is starting to get better.

We need to embrace the menopause because it literally happens to almost every single woman on this planet and it’s going to keep happening, so it’s not going away!

It’s really important that we start talking about it, which is why I have developed a program which I run at the studio I work at.  It’s a 6 week educational course that is full of practical strategies and tools you can use. It’s all centered around your health and wellbeing  and how you can manage your lifestyle to help you through the whole process. I can’t wave a magic wand and stop it from happening, but what I can do is educate on how you can manage your health optimally during this transition period.

This isn’t just an issue for women, it’s an issue for men too, and it’s also a major issue in the workplace. Symptoms can potentially go on for years, and be very debilitating and it can massively impact their performance at work –  how they show up and feel at work.

What are the symptoms to look out for?

A lot of women feel like they’re going crazy because there’s such a big impact that’s going on in your body. There’s a decline in your hormones, particularly your sex hormones, which is estrogen, progesterone and testosterone, and because of that women can experience up to 48 different symptoms which can be categorized into physical or emotional, cognitive, and mental.

It can range from joint aches and pains, really bad migraines, it can cause vaginal dryness because it affects the lubricant, and it can cause brain fog.

You can lose words when you’re mid-sentence and it can cause night sweats, hot flushes, anxiety, low mood, low libido, skin problems, teeth and gum problems, hair loss, and weight gain. The list goes on.

What’s the difference between menopause and perimenopause?

The official term for menopause is when you’ve gone a whole 12 months and one day with no period. Perimenopause is basically the lead up to that.

What generally happens is women will start to experience symptoms but they’ll put that down to other things. For example, when it all started for me, I was putting it down to a very stressful event at the time, when actually it was perimenopause kicking in.

If you are concerned about it, go and check with your GP. In the UK we have a doctor called Dr Louise Newson who’s really trailblazing this whole topic at the moment. She’s developed an app that includes a questionnaire you can fill in and it will bring up a report for you. So if you’re starting to get symptoms and you’re not quite sure what’s going on, you can go through that process and take that report to your GP to discuss it in more detail.

Tip 1: Be really kind to your body

I know it sounds really cliché but because of the symptoms that they can experience, particularly with the weight gain, I think a lot of women tend to go on a diet and exercise more, and start to really almost punish their bodies for what they’re going through, when actually what they need to do is the exact opposite of that. So we really need to start nurturing our body, really tune in and listen to it.

Don’t beat yourself up because it’s not you, it’s your hormones. It’s not that you just suddenly became lazy and you start eating all the cookies out of the jar, there’s reasons why your body stores more weight around this time.

So be super kind to yourself.

It’s all about having your body in as much balance as possible and when we’ve got too much stress going on your hormones won’t have a chance. So anything that you can do, such as going for a walk, spend time in nature, meditation, breathing, mindfulness, anything that is going to help you lower your cortisol levels.

Always be mindful of what you can do to manage your stress.

Tip 3: Talk about it

The more you talk about it, the more open you can be with yourself and those around you, the easier it will be for you and everyone else because it happens to a female but it does impact everyone around them as well.

I’ve spoken to so many women about this and it can be a very confusing time and very lonely. Women can get extremely depressed. I’ve known of women who have actually taken their lives because they’ve not been able to handle it. So it’s imperative that we talk about it more and that’s without even going into any of the health stuff that I talked about specifically.

The symptoms can be very embarrassing especially if you’re in a meeting, for example, and all of a sudden, a hot flush will start and your temperature suddenly shoots up and you start to sweat, and it’s very visible. Then what happens in reverse is after the flush comes on, and it only happens for three to four minutes, the flush goes away and start to get really cold and shiver, so there’s a reverse impact to it as well. There’s no warning or alarm bells, it just happens in the moment.

What can men do to support their partner through menopause?

I have male friends and they have no choice in the matter. They have to hear about what I’m going through because it’s just so important.

Don’t assume that men are going to understand it even when you start to explain the symptoms, because they can’t get their heads around it because they’re not a woman so the best they can do is to listen to you, and maybe do their own research or find something that resonates with them which they can get their head around and then just be open to talking about it.

If you’re in a good relationship, it’s really about communication, and saying, hey, just letting you know, I’m having one of those days.  I refer to it as a wave.  If you have that good communication, then hopefully he will understand it’s not you, it’s your hormones and be there to support you the best way he can.

One woman shared with me last week that she goes and hides under the duvet with a book and doesn’t come out until she’s feeling better but that’s her strategy. She knows it works for her. Right?

So if the guy understands that, then there’s not this breakdown and to remember that it’s the deficiency in hormones which is causing it.

There’s so much more research and support out there now than there was, I vaguely remember my mum going through a weird time, but it was never spoken about so if you’ve got children, please have that conversation with them.

There’s 15.5 million women in the UK right now going through some stage of menopause, so that’s a very large percentage of our population.